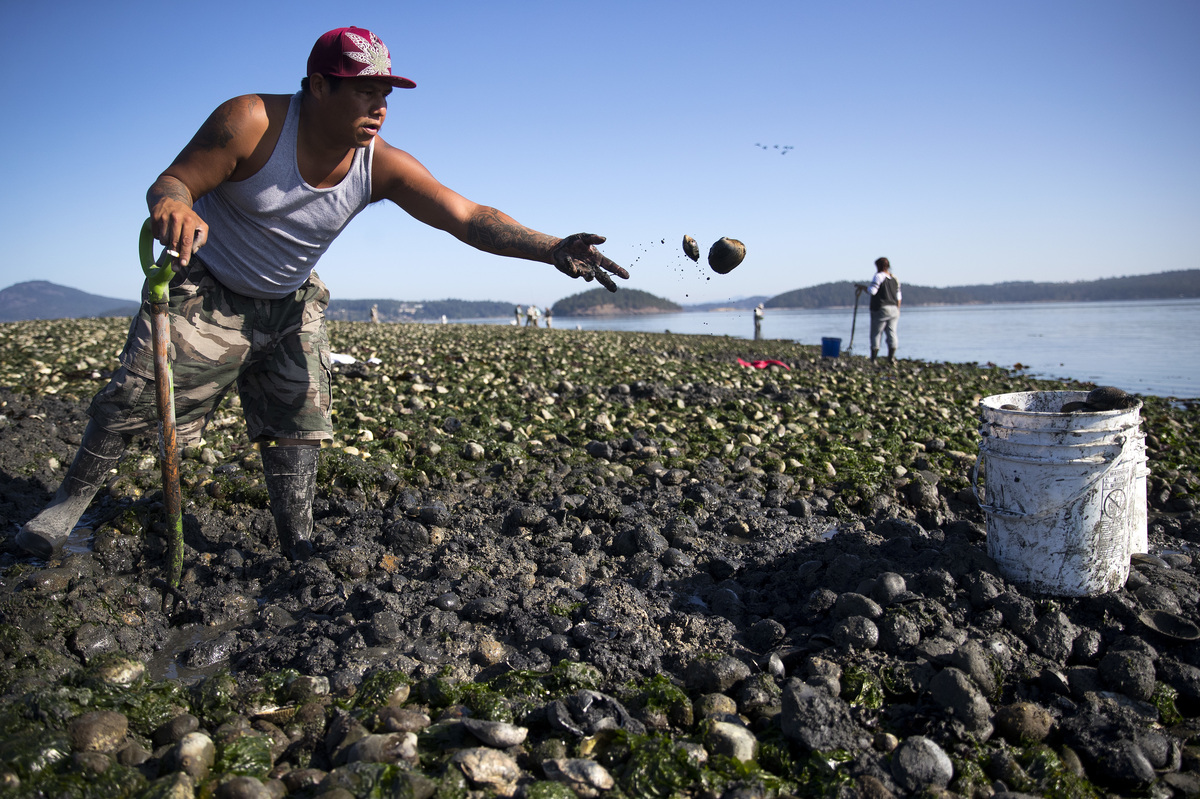 Tribes in the Puget Sound region have a problem.

Many of them live on low-lying reservations surrounded by water. So, as climate change causes the oceans to rise, tribal land is disappearing. Climate change also threatens the fish and shellfish these groups rely on for food and income. Now, some tribes are looking at a surprising solution to these problems: clam gardens.

On a rocky beach on Whidbey Island — a densely forested island in Puget Sound — John Cayou watches for the telltale squirt that reveals a clam’s location.

Then he takes what looks like a tiny pitchfork full of sand and rocks, turns it over, and tosses any clams he finds into a bucket.

Cayou’s a member of the Swinomish Tribe. He’s 72, and has been harvesting clams since he was a little kid.

He remembers a time when there were a lot more clams.

“You’d take the bucket and the clam fork, and you would go out, and believe you me it wouldn’t take very long — maybe 10, 15 minutes max — you had a bucket,” Cayou says. 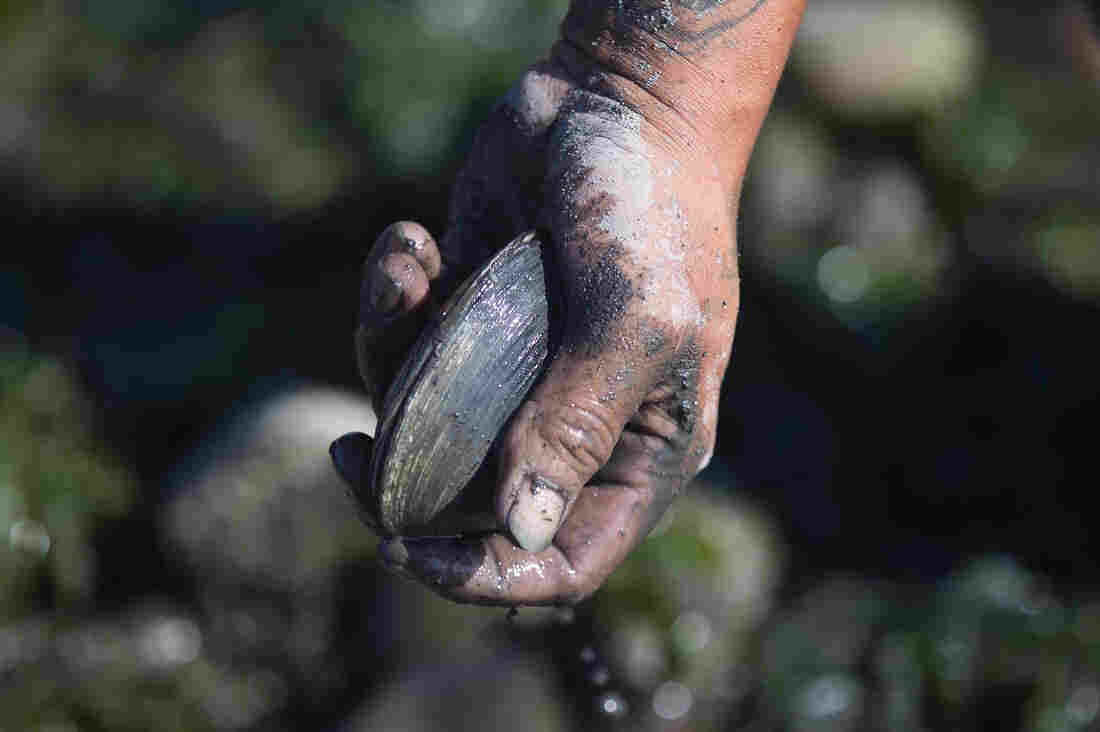 Clams have been an important part of tribal diets in the Pacific Northwest for centuries.

But, nowadays, native clams up and down the West Coast are not doing well.

“Native littlenecks have declined so much throughout Washington’s inland waters that they’re really difficult to find now,” says Julie Barber, a shellfish biologist for the Swinomish Tribe.

The likely culprit is climate change. Warming waters mean less algae for clams to eat. And more carbon in the atmosphere is also making oceans more acidic, which is bad for baby clams. That’s why Barber and others are trying to build a clam garden on the Swinomish Reservation.

“What a clam garden can do is provide a place for the tribe to continue their practice of harvesting clams for subsistence,” Barber explains.

A clam garden is a rock wall built so low on a beach it’s only visible at the lowest tides. The walls are designed so sand and bits of clam shell build up behind them.

Those bits of shell can make the water around them less acidic, which creates some buffered habitat for baby clams—and other species. 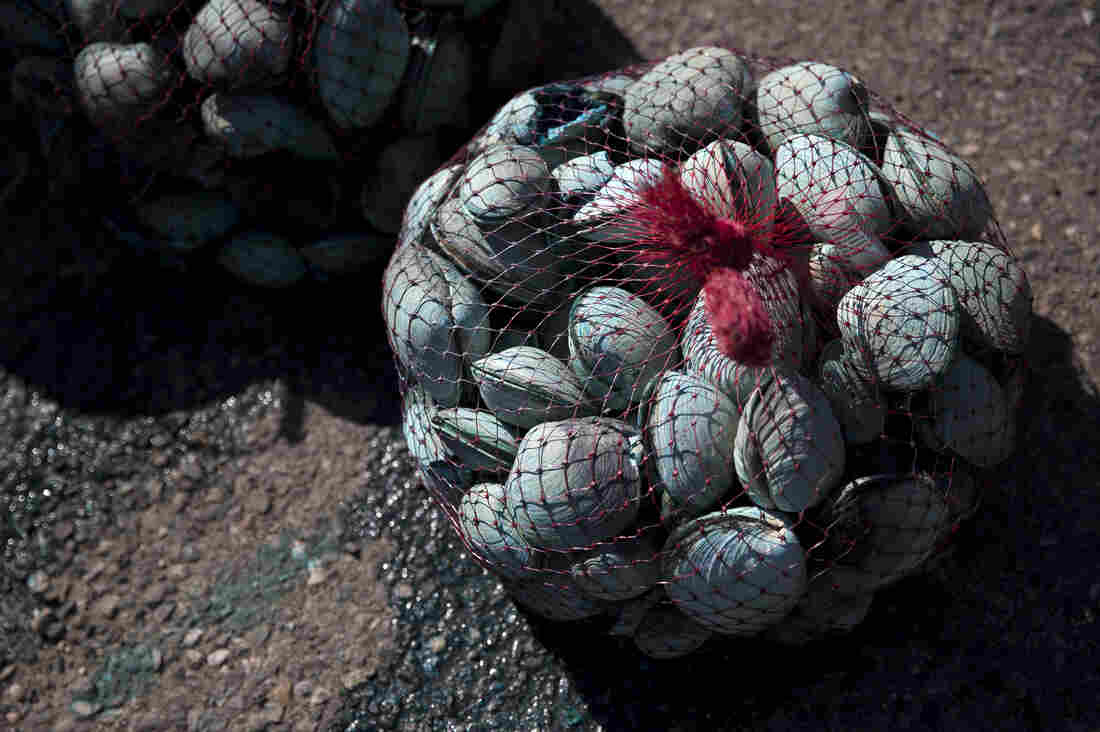 “That rock wall creates a new rocky reef habitat that supports a whole different suite of marine plants and animals,” says Skye Augustine, an ecologist and a member of the Stz’uminus Nation, from the east coast of Vancouver Island.

She says that Clam gardens can also cut down on beach erosion and reduce wave energy as sea levels rise. So these gardens would help hold the Swinomish Reservation in place as climate change advances.

“Clam gardens have been around on the British Columbia, Alaskan, and Washington state coasts for over 3000 years,” Augustine says.

After colonization, those gardens fell into disuse. Now, Augustine is running the first project since then to restore the gardens in British Columbia. The Swinomish’s would be the first revival of this tradition in the U.S.

At the annual Swinomish clam bake, more than a hundred tribal members gathered at long tables at a beach on the reservation, eating all kinds of shellfish.

“There’s the old Indian saying in this part of the world that when the tide is out the table is set,” Swinomish elder Larry Campbell says, “because the clams are in our tideland.”

The goal of the clam garden is to keep the table set.

The Swinomish Tribe hopes that its new garden will be built as soon as next summer, in time for the next clam bake.

How to get rid of belly fat: Woman reveals the diet plan she followed to lose seven stone

Students face their fears by burying them in the ground | Humankind

WeWork’s Multibillion-Dollar Takeover by SoftBank Could Turn Into...

Nobel Prize in Physics Awarded for Studies of...

Pregnant Women Should Get Flu and Whooping Cough...

Purpee.com is a multi-platform publisher of news and information.

Purpee.com has earned a reputation as the leading provider of service news and information that improves the quality of life of its readers by focusing on health, personal finance, education, sports, travel, news and opinion.